"We were excellent in the first half"

Xavi: "We were excellent in the first half"

Xavi Hernández was pleased with FC Barcelona's victory against Getafe on Sunday because the team secured three more points and he took another huge stride towards regaining his best form after recovering from injury.

The Blaugrana midfielder played 77 minutes in the 1-3 triumph as Lionel Messi, David Villa and Pedro all scored. Xavi played a central role in the triumph before being replaced by Sergio Busquets. "I am better," he said. "I am being patient and sparing and I feel better and better. I do not have much pain, which will go, but it is not the same as a month ago."

“We need to finish off games” 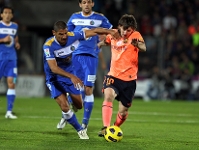 "We played an excellent first half, the best this season," Xavi continued as he reflected on the win in the Coliseum Alfonso Pérez. "In the second half they were stronger and employed individual marking in midfield, but we have been able to stick to our game. The shame is that we did not finish the game off. We have to start doing that. That is all we missed, a third and fourth goal earlier on to finish it off."

Gerard Piqué was sent off and Xavi may have regretted it during the game against Getafe, but his immediate thoughts went to next weekend when the defender will be unavailable for the Villarreal game. "He will miss the game on Saturday and will be a big loss." Xavi added.

Below is what some of the other players had to say after the game: 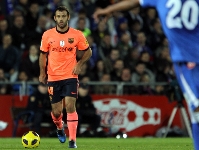 "It was a confusing second half because of the sending off as we played with one less. Generally, it was good and we deservedly won."

"I am becoming more accustomed to the way that the team plays all the time."

"We talked before about how difficult it was to come here and win and it was a game that was tough."

"What was most important was that we won and we have done that."

"Winning is what is important. From outside it may seem to have been easier than it was because these places are always difficult."

"We played the same in the second half as we did in the first. When we were left with ten players they raised their game, but we controlled things perfectly."

"I felt that Piqué's handball was involuntary, but the referee felt another way and that has to be respected."

"I block shots because it is a philosophy I had since I was young and I feel more comfortable." 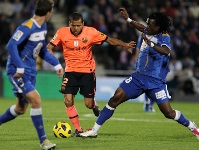 "When we score early it makes everything more comfortable."

"Now that the difficult games are here we have to be prepared and today we could have scored more with more luck."

"The red card was harsh because the first card came from a normal move. But we should not look for excuses."

"We do not play for the title over a couple of games but throughout the entire season. We have to go game by game and when el Clásico comes we will focus on it."

"I am sure Messi is frustrated because he had a lot of chances and has not scored more, but we are happy with the win."

"The sending off is a difficult thing because these games are intense and the referees are under a lot of pressure."

"We are on a good run and it is a shame that we cannot finish games off, but we will recover the goals at home and will make the fans happy." 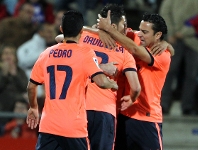 The FC Barcelona will report for training at 11:00 on Monday at the Ciutat Esportiva Joan Gamper and Pedro will appear in a press conference afterwards.