“The most dangerous thing right now is Getafe”

“The most dangerous thing right now is Getafe”

Pep Guardiola would rather leave aside for now talk of the Madrid game, and focus instead on the trip to the Coliseum Alfonso Pérez. “It’s always a difficult ground” he said.

Pep Guardiola likes to take each game as it comes, and made that point more than clear in his press conference after training on Saturday morning. He said “the most dangerous thing right now is Getafe. Then we have Ceuta, Vila-real, Almeria and Panathinaikos … the games before and after Madrid are also important”.

Barça go to the Coliseum Alfonso Pérez tomorrow. It is always a difficult ground because they have good men, a quality midfield and speed up front. They want to play football and know how to … we shouldn’t think, just because they’ve just had two poor results, that they’re easy to beat, rather quite the opposite”.

Guardiola also had words to say about his rival manager of Getafe, Míchel González. Segons ell, “is a big name in Spanish football and his teams always play well, because they reflect his philosophy, which we know of form his time as a footballer and commentator”. On former Barça player Víctor Sánchez, he said “all the loaned players might come back one day, the good news is he’s getting a game, and lots. That makes me very happy. I want to wish him the best”. 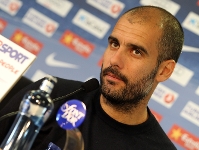 The manager refused to give away details of his starting eleven tomorrow, and just commented that they are fit. Xavi, he said “has recovered well. We have had five days to recover and that’s a bonus. His travelling and I’m sure he’ll play.” To end, he said “if Barça play better or worse, it’ll have nothing to do with fitness … we just have to maintain the same rhythm of previous games”. 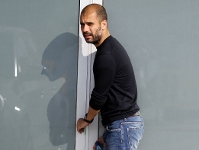 Pep Guardiola has once again named reserve player Thiago Alcántara in his first team plans. “He has slightly different qualities. It’s his character, he’s daring. He wants to be a footballer and he’s ambitious … we are delighted with him, but he must realise he’s still very young and has to take things little by little”.