Full squad on the pitch

Full squad on the pitch

All of the first team plus five of the reserves trained on Friday at the Ciutat Esportiva Joan Gamper as they prepare for Sunday’s trip to Getafe.

In the second session since the draw against Copenhagen, Josep Guardiola had 18 of his team with him. The only man missing was Jeffren, although, as on Thursday, he did spend some time on the field with a fitness coach as he battles back from the injury sustained against Ceuta. 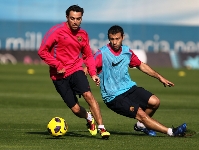 Xavi, Messi, Piqué and Iniesta missed Thursday’s session to concentrate on gym work, but were back to the normal routine today. 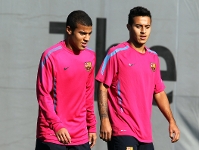 The usual warm-up drills were followed by a series of fitness exercises. 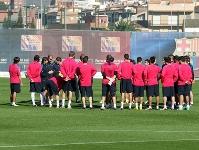 Next session, Saturday at 11 am

FC Barcelona will train again at the Ciutat Esportiva Joan Gamper on Saturday at 1.00, after which Josep Guardiola will be giving a press conference on the eve of the clash with Getafe.