FC Barcelona may have had control in the Parken Stadium, but the woodwork proved to be their undoing. Here are some facts and figures from the Champions League encounter.

► Barça enjoyed 67 per cent of the possession, in both the first half and the second too. 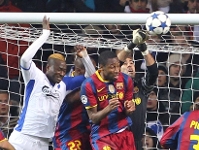 ► Seydou Keita made his first start in the Champions League this season when he lined up against Copenhagen.

► Sergio Busquets received his first yellow card of the season in the game.

► Javier Mascherano did not play any part. It is the first time he has remained unused since the game against Athletic Club on September 25, a total of eight matches.

► Pedro has appeared in every game since Barça played Sevilla in the Spanish Super Cup, a run of 15 consecutive games.

► It is the first time this season that Maxwell has not participated in two consecutive games.

► Barça conceded their first goal in five matches. The last one came in the 2-1 victory over Valencia.

► Lionel Messi has scored 11 of his 15 goals this season in the first half of games.

► Barça have not won away from home in the Champions League since December 9, 2009, when they beat Dynamo Kyiv 1-2. They have been unable to beat VfB Stuttgart, Arsenal, Inter, Rubin or Copenhagen. 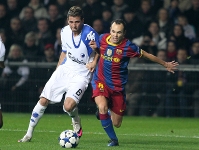 Pep Guardiola made only one change in the game for the first time this season when he switched Pedro for David Villa.