“We’ll have to put in a very good performance”

Guardiola: “we’ll have to put in a very good performance”

Ahead of Tuesday’s game, Pep Guardiola has insisted that Copenhagen will pose a very different threat from Seville: “it’s a different competition and a completely different game – we`ll have to put in a very good performance”.

Guardiola knows full well that the Danes have made a great start to their season and saw enough of them at the Nou Camp to affirm: “we’re up against a very strong team and it’ll be a tough game in all senses of the word”.

The boss clearly has plenty of respect for the Danish Champions and reckons: “they are physically very strong and they know what to do both in attack and defence. They are a tough prospect playing at home and they have a lot of things that we need to keep an eye on. On a technical, tactical and concentration level, we’ll have to put in a very good performance”.

If the other result in the group goes right, Barça could have qualification wrapped up with a win on Tuesday and Guardiola, who insisted it was no easy thing to get through the group stages, admitted: “we know that a win would be a big step to ensuring qualification for the next round and that would allow us to ease up until February in Europe, which would give us some relief on other fronts”. However the boss didn’t want to hear about how a win would help him prepare for the clash with Real Madrid, insisting: “there are plenty of games before then”. 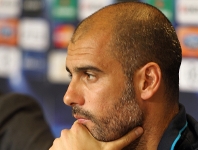 Although Xavi got through most of the game against Seville and felt fine after the game, Guardiola was cautious about his Spanish midfielder: “it’s better to be watchful and careful. His problem isn’t totally sorted –we’ve taken a step in the right direction, but we have to keep working to make sure he doesn’t slip back”.