Messi: “It’s been a good week”

Messi missed the trip to Ceuta in midweek and he stressed the importance of a week of training at the Ciutat Esportiva for a number of the senior players.

“it’s been a good week for working out and recovering our physical fitness”, he explained to the Barça TV programme” El Marcador”, after the game against Seville.

Messi was also happy with the way that the team had got through the week and indeed for their progress so far this season: “we’re relaxed about things because we are just continuing to do what we have done to win all the titles we have”. Messi showed his optimism about the rest of the season too: “I think we’ll improve as the season goes on”. 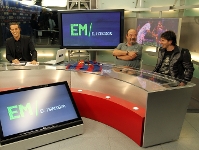 Messi opened the scoring against Seville, but he believes that : “scoring that early goal was lucky for us - fortunately my shot went between the defender’s legs -because it settled our nerves, which didn’t happen in the other games”. As for his second goal, he explained: “Alves drew my marker off and that meant I could go through and get a shot in easily.

Messi believes that the fightback against Valencia could prove to be the turning point for the season: “that win against Valencia really gave us a lot of strength” and the truth is that since that game the team have chalked up five straight wins. 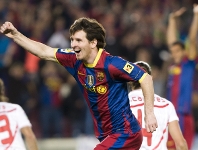 “It’d be good to win in Denmark”

Messi revealed that this year: “I’ve not placed any bets with Pinto” (about how many goals he’ll get), “but the more I get the better”. As to this week’s trip to Denmark, Messi insisted: “it’d be good to get a win so that we can take our minds off the Champions League for a while”.