Xavi and Milito back with the squad

Xavi and Milito back with the squad

After a few days working apart from the rest of the squad, aiming to get over their respective injuries, Xavi and Milito rejoined the group this morning for training at the Ciutat Esportiva Joan Gamper.

Guardiola was able to call on a virtually full squad after the players who played on Tuesday missed yesterday’s session and came back to join the rest this morning to prepare for Saturday’s league game against Seville. 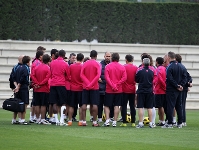 The best news for the boss was the return of Xavi and Milito to the rest of the squad to train normally after their recent injuries.

Milito has been out since he suffered a thigh strain in training on Monday 18th October and the doctors reckoned he’d be out for up to two weeks, whilst Xavi has been suffering with Achilles tendon problems. The Spanish midfielder noticed some pain towards the end of the Valencia game and only played the last few minutes of the Copenhagen game, before missing the Zaragoza and Ceuta games.

18 from first team squad and Thiago

Only Jeffren was missing from the 18-man squad, as the youngster was ruled out for four weeks after picking up a back injury against Ceuta. B team midfielder Thiago Alcántara also joined the session. 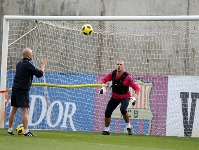 Víctor Valdés joined the rest of the group late after doing some work with physio Juanjo Brau whilst the other players did some ball work. 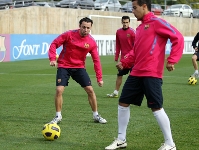 The players had their first training experience this year with the yellow coloured ball which is known as “the winter ball”, this morning.