Six years of winning starts in the cup

Six years of winning starts in the cup

After beating Ceuta on Tuesday (0-2), FC Barcelona have now won their opening games in the cup in each of the last six seasons. They faced Division 2B sides on each occasion.

Not since 2005/06 have Barça lost their opening cup tie. Zamora, Badalona, Alcoiŕ, Benidorm, Cultural Leonesa and Ceuta this year have all bean defeated by FC Barcelona. These games are always potential banana skins against unfamiliar but highly motivated ‘lesser’ sides, and always require a particular brand of humility, seriousness and concentration.

But Barça have always been able to maintain their winning mentality, even in games that are, at least in theory, foregone conclusions. 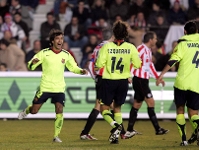 The first of these six wins was in 2005/06 under Frank Rijkaard and away to Zamora at the Ruta de la Plata, where Barça won 1-3 with goals from Gio van Bronckhorst, Márquez and Giuly. They then sealed passage in comfortable style at the Camp Nou, winning 6-0 and eventually going out in the quarter final.

In 2006/07, Barça were drawn against neighbouring Badalona, and played their felloe Catalans on the back of losses to Chelsea (1-0) and Real Madrid (2-0). A Gudjohnsen brace was enough to seal a 1-2 win, with Tarradellas converting a 92nd penalty for the home side. FC Barcelona stormed to 4-0 victory in the second leg. 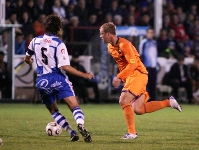 Alcoiŕ was the opposition in the 2007/08 edition, and Barça again won away with goals from Henry, Gudjohnsen and Bojan. The return leg was the first of 2008, and ended scoreless.

FC Barcelona got their 2008/09 cup campaign off on the right foot with a 1-0 win at the Municipal de Foietes in Benidorm. Bojan scored the only goal. The return leg produced more problems than expected, and wasn’t decided until Messi found the net in the 86th minute. That was the years FC Barcelona won their 25th Copa del Rey by beating Athletic Bilbao 4-1 in the final.

No mistake against Cultural Leonesa

Last year’s campaign saw Josep Guardiola’s side start right again, this time with two goal from Pedro against Cultural Leonesa at the Reino de León, which was followed by a comfortable 5-0 win at the Camp Nou. 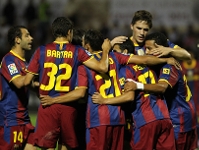 16 classifications against 19 Division 2B rivals