“It wasn’t easy to play such a serious game”

“It wasn’t easy to play such a serious game”

Guardiola was well aware of the value of Saturday night’s win over Zaragoza, particularly given the hectic schedule his team have been enduring, insisting: “it wasn’t easy to play such a serious game so soon after Wednesday’s Champions League game”.

The win at La Romareda, the team’s fourth away victory on the run and a record start to the season, pleased the boss and especially after the efforts of Wednesday night when the team beat Copenhagen in the Champions League, leaving precious little time to prepare for the trip to Zaragoza. 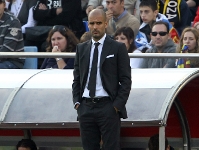 “Overall, we had control of the game and created plenty of chances. It wasn’t easy to play such a serious game so soon after Wednesday’s Champions League game, but the squad is looking in good shape and if we can stay like this, we’ll get to where we have to in even better condition”.

Guardiola also expressed his satisfaction with his three man defence: “the truth is that it’s never easy to play when you aren’t really used to a new tactic, but the truth is that the players knew how to respond and I’m very happy with how they played”.

“Messi is a goal scorer” 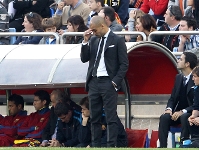 Once again Messi was the star of the show and Guardiola insisted: “he is basically a goal scorer. It’s not something new, he has always been. He’s not a typical number 9, but he’s always after goals – that’s why he’s scored so many in so few years. He was comfortable tonight and we created plenty of chances, coming through the middle and down the flanks”. 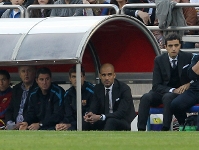 Once again David Villa was out of luck in front of goal, hitting the woodwork for the umpteenth time so far this season, but Guardiola values him for everything he brings to the team, not just his goals: “we came here to win the game, I can’t judge him just by the goals he scores. He did a lot – everything he had to. He had chances and they’ll go in eventually, it’s just a matter of time. He’s still happy”.