Like last year, Barça will be going to the Aragonese capital on the train. They will leave Sants station on Saturday morning on the AVE high speed train.

The game at La Romareda kicks off at 6.00 pm, and as usual for away league matches, the players will be travelling on the day of the match. But this time, they won’t be flying, but will travel on from Sants station. 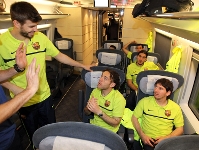 Spanish railway company Renfe is laying on a special AVE high speed service for the trip, which departs at 9.50 and pulls in at Zaragoza Delicias at 11.23. When the game is over, the squad will return by the same method, and should be back by around 11.00 pm.

This is the second year in a row that FC Barcelona have gone by rail to Zaragoza. Last season was the first time this mode of transport had been used since the 1997/98 season, when Barça took the train to Valencia to play Mallorca in the Copa del Rey final. 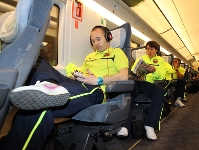 Going by train is no bad omen, for last year Barça won 4-2 at La Rosaleda mainly thanks to an astounding Leo Messi, who was on target three times. Colunga pulled one back for the home side, but the game was put out of their reach when Ibrahimovic scored from the penalty spot in the 90th minute.