Bojan: “The goals are sure to come”

Bojan: “The goals are sure to come”

Bojan Krkic sat out his first game of the season on Saturday, but he remains confident that he’ll soon bag his first goal and that will be the first of many: “I’ve no doubt - the goals will come”.

Bojan was present at the presentation of the Barça Veterans 2010/11 prize for fair play which he picked up. The young striker refuses to let the lack of goals get to him and insisted: “it’s only normal that people say things, because I’ve still not scored, but when the first one goes in, I’m sure there will plenty more to come”.

Normal part of the game 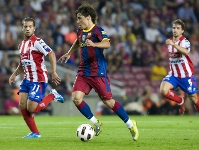 Bojan is well aware that goal droughts are part of the strikers bread and butter, as his teammate Villa commented on Saturday and that the tension and desire that can create is often a positive for a player: “we have to have that feeling for the goals to come”.

Bojan is starting his fourth season in the first team squad and believes: “the footballing world can be unfair – I’ve had three good very good years” –something some commentators tend to forget. The stats are also on his side- he’s the youngest player ever to play 100 games with the first team, during which time he’s notched up 34 goals. 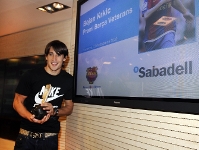 Just ahead of Puyol and Messi

This Monday’s presentation of the Fair Play award came after a close vote on the website premifairplay.com, with Bojan (36,1%) just seeing off Puyol (35,6%) and Messi (28,3%). The Veterans particularly valued his fair play, respect for his opponent and the priority given to the group ideal.

After receiving the award, Bojan said: “Thank you for the recognition this award gives me. I’d like to thank everybody who made it possible for me to be here, especially my parents and Ramon Alfonseda”.