Puyol: “The team is still hungry to win”

Puyol: “The team is still hungry to win”

Carles Puyol highlighted the reaction of the players after going behind and fighting back to win. The Barça captain claimed that was evidence enough that the team has not lost its hunger to win”.

After eleven years in the first team, the FC Barcelona defender is experienced enough to know that the squad has not lost any of its ambition after winning everything in the last few years. He has also been through less successful periods at the club, and knows that it is never easy to win trophies. Against Valencia, he said, “the team showed that they want to carry on winning. They are still hungry”.

Puyol scored the winner on Saturday evening, and was then the special guest on the ‘El Marcador’ show on Barça TV. 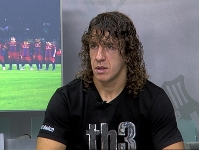 Barça have been the comeback kings under Guardiola, and against Unai Emery’s side they were once again called upon to deliver. “The most important thing was the reaction because it is when things go wrong that you really need to display character and the team did that today”, said Puyol. Against Valencia they were “playing for three very important points. It is always important to get points but after the last few home games they were difficult ones to win and we hard to work hard”.

Carles Puyol also said “We had chances but the important thing is to create them. We have top quality players and the goals will come. We’re not worried”. 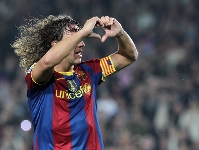 Carles Puyol scored with his head against Valencia, a goal that brought back memories of the one he scored at the Bernabéu in that famous 6-2 win, and also his goal in the World Cup against Germany, which sent Spain into the final. And all of those goals came from crosses delivered by Xavi, for which reason Puyol said “he got half the goal.” He explained how, when he goes up to join the attack, he puts everything into what he does, and on Saturday at the Camp Nou, Valencia discovered that the hard way.