Del Bosque’s World Cup winning Spanish team beat Lithuania 3-1 on Friday night, with five Barça players in the starting line up. Llorente (2) and Silva were on target for Spain, with Sernas getting Lithuania’s goal.

The game in Salamanca was Spain’s first since their success in the summer and the win leaves them top of the group with a maximum six points ahead of Tuesday’s game against Scotland.

Spain dominated the game from start to finish and with five Barça players in the starting line up – all the players called up except for Valdes, who was one of the three players left out of the final squad – they played what has become their typical passing game and soon had Lithuania pinned back in their half. Ramos hit a post on 20 minutes and just before the break, Villa did the same when he was one on one with the keeper. The Barça striker gave his ex-Valencia teammate Stankevicius a torrid time and together with Iniesta was one of the best players on the night.

Llorente opens up the scoring

The long awaited opener came at the start of the second half when Cazorla’s inch perfect centre found the towering Llorente, who headed in for his first goal of the night. Lithuania shocked the locals with an equaliser from a counter attack, but Cazorla and Llorente again combined for the Navarran striker’s second and Silva wrapped it all up with a third. 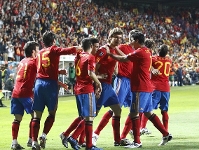