Villa: "We create more chances than anyone"

David Villa is not concerned by Barça’s profligacy in front of goal and insisted that the Blaugrana are creating chances, as he joined up with the Spain squad ahead of their European Championship qualifiers.

After dropping five points in league games at Camp Nou already this season the focus has fallen on the lack of goals that the team scored in September, but the striker thinks they will start to convert more. “We have lost those points and now we have to work hard to ensure it does not happen again,” he said.

“There is no other team that creates as many chances as we do,” the striker continued. “We have not converted as many as we should and this has cost us. But it is not that we have not created them, it is just that we have not taken advantage of them.” 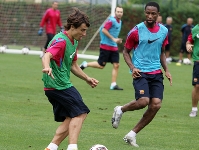 Bojan Krkic has yet to score this term, but Villa thinks it is only a matter of time. “He is doing things well and is only missing a goal, but as he is playing good we need him,” he explained. “Having a run without scoring is something that happens to every striker. Bojan is very young and has great quality and I am sure that his luck will change. He will go on to score a lot of goals this season.”

Villa’s former club Valencia are riding high at the top of the table. “They are the strongest team at the moment,” he said. “But there is still a long way to go.” 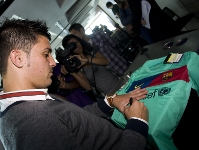 Xavi’s return is something that David Villa is looking forward to. “I wish him a speedy recovery,” the forward said. “I also hope he avoids a repeat of the injury for the sake of both Barça and the Spain team.”