Pedro out for three weeks

Pedro out for three weeks

After further tests this morning, club doctors announced that Pedro Rodríguez will be out for up to three weeks with the injury he picked up against Mallorca.

The tests showed a torn calf muscle and first impressions are that Pedro could be out for up to three weeks, during which time Barça will play Valencia, Copenhagen and Zaragoza, with Pedro already ruled out of the two Spain games over the next two weeks.

Pedro, who had played in nine of Barça’s ten games so far this season and scored once, against Panathinaikos, was taken off on 77 minutes and substituted by Nolito in Sunday’s draw with Mallorca.

Adriano, called up by Brazil

Adriano, who is still recovering from the injury he picked up against Bilbao in San Mames has been called up into the Brazilian squad and will have to report to the Brazilian Federation doctors, who together with the club’s medical services will decide if he finishes his recovery back in Barcelona. 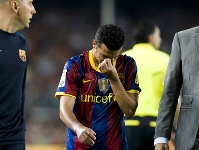