Pep Guardiola reckons his team is playing even better now than they were three years ago, but is also aware that after the exertions made over the last few games, his players might need to make a special effort against Mallorca.

Guardiola is an assiduous watcher of videos of games his team played in past seasons and as a result, he believes that right now his team are playing: “better than in my first season”. Unlike then though, Guardiola’s teams no longer have that surprise factor they once did and the general tonic seems to be that visiting teams come to defend with as many men as they can. The boss doesn’t worry too much about that though, claiming: “we’ve played against all kinds of defensive tactics and we’ve come out more or less always okay”. 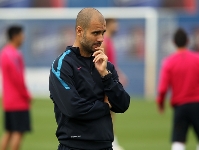 Guardiola never underestimates his opponents and insisted: “you’ll never hear from me the word ‘easy’ about another team”. Against Mallorca: “we’ll have to come out with the maximum intensity if we want to win”, explaining that the games against Atletico Madrid, Bilbao and Rubin Kazan: “came at a time when they can leave you a bit less than 100% and that can mean you maybe don’t have enough to win the next game”.

Guardiola will also have to make do without Xavi for the Mallorca game, but he believes: “we have alternatives. Every player has their own qualities and we know how to make the most of them”. He also commented that international break should give Xavi time to get over his injury: “the professionals and the player are putting a lot of time into helping his tendinitis”. 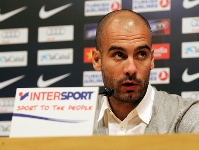 Sunday will be the first time that Pep has some up against his ex-team mate Michael Laudrup as a manager and Guardiola was full of praise for the Dane: “he played so well, I’m sure he’s got to be a good manager too. He played his best football when he was here and when I played with him we always tried to give him the ball as we knew he’d just do something special”.