Speaking at the presentation of the Golden Boot to Leo Messi on Thursday night, club President Sandro Rosell declared his desire that the Argentinean star stay at the club: “all his life”. 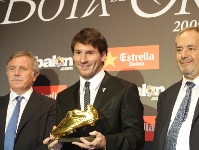 FC Barcelona’s intentions for Leo Messi were made clear by Sr Rosel, who spoke at the presentation at the old Damn factory, when he told Messi: “we’ll never let you leave. You’ll be with us all of your life!”.

Speaking directly to the player, the President told him: “Leo, in the name of all the Barcelona club. I want to thank you. You have praised the work of La Masia and you are a faithful reflection of what we want -the first player who has come through the club to win the Golden Boot , Golden Ball and World Player of the Year. Thank you also for the person you are – you are a Golden Person too”. 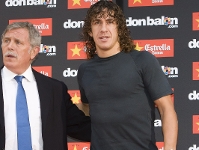 Amongst the friends attending the presentation were teammates Carles Puyol and Xavi Hernández. Puyol commented: “Messi is the best player in the world. He shows that week in and week out. His humility just makes him an even greater player”.

Board advisor Migueli wasn’t surprised by the award: “Leo can’t surprise me anymore– he did the first day I saw him. He has tremendous quality. He’s thrilled us all and he’s the best in the world – I wish him all the best for the future”.

Finally, first team trainer Juanjo Brau, who has shared many of Messi’s highs and lows, stressed Messi’s “sense of being a part of the team, his humility and the friendly way he treats everybody. He’s the best in the world, but he’s got his feet firmly on the ground”. 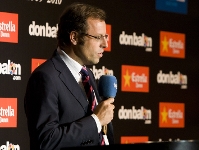 Rexach: “he discovered himself!”

During the ceremony, Carles Rexach was also honoured and the man many consider to be the person who discovered Messi insisted: “he discovered himself! You didn’t have to know much about football to see how good he was”.