David Villa, who was shown a red card on Saturday at the San Mamés, has been issued a one-match suspension.

The Comitč de Competició has penalised Villa for his tussle with Gurpegui during the match with Athletic Bilbao. This means the Asturian will be absent for the Liga match next Sunday against Mallorca at the Camp Nou (19.00).

David Villa has played in every one of Barça’s official matches this season apart from the first leg of the Spanish Super cup in Seville, when he had only just got back from his holidays. He has played in seven games, five in the league, one in Europe and one in the Supercup. 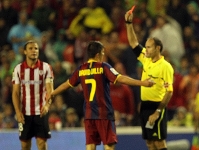