Víctor Valdés laid stake to a place in the history of the club some time ago and he is the keeper who has played the third highest number of games in goal for Barça- The win in Bilbao meant that he equalled the record of 177 wins held by Andoni Zubizarreta and Antoni Ramallets. 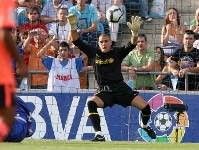 Valdés, who made his debut under Louis van Gaal eight years ago on September 11th 2002 against Atletico Madrid, has made innumerable great stops to save the team over the last few years and averages 0.84 goals conceded per game in a 269 game run that has seen just 36 defeats. 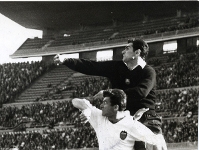 That was how Antoni Ramallets, who thrilled the Brazilian fans with some astonishing saves in the 1950 World Cup, was nicknamed. Ramallets was the keeper in the team of the 5 Cups, played 288 league games and enjoyed 177 victories, 47 draws and 64 defeats. Ramallets, who played for Barça from 1947 till 196, conceded 358 goals – averaging 1.24 a game. 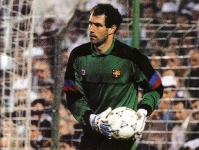 The “Dream Team” keeper was part of the club’s first European Cup winning team and is the keeper who’s played most league games for the club, winning his 177, losing 55 and drawing 69, conceding 273 goals -an average of 0.91 a game. 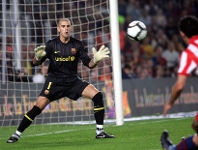 So far, Valdes has played in all 5 league games and conceded 4 this season and if he keeps injury free, he could overtake Antoni Ramallets and Andoni Zubizarreta this season.