Spanish League Round Up Week 5

Spanish League Round Up Week 5

In a weekend that saw Antonia Alvarez become the first managerial casualty of the season after Seville sacked him following the 2-0 defeat at Hercules, Real Madrid were held to a goalless draw by minnows Levante and Valencia moved into top spot.

Seville’s defeat at Hercules meant that they slipped out of the top six and proved the last straw for President Del Nido following the team’s exit from the Champions League and a series of poor performances at home, who immediately moved to install ex-Mallorca boss Gregorio Manzano as his new manager. The game itself saw Trezeguet grab a brace to take his total to three so far this season as Hercules added another big scalp to their early season success to move to eighth spot, just a point behind Seville.

Although defender Alvaro Arbeola attempted to minimise the importance of Madrid’s goal drought after their second goalless draw of the season-“it’s just an accident, the goals will come”, Mourinho’s team have so far bagged just six goals in La Liga so far, though they have also conceded just the once, compared with 15 goals scored and two conceded at the same stage last year. As well as seeing Barca move into second, Madrid’s draw also saw Valencia take top spot after two early goals from Topal and Soldado gave them the points in Gijon against Sporting.

Espanyol’s latest young striking sensation, 19-year-old Alvaro Vazquez took advantage of Osasuna losing defender Lolo to two early yellow cards to score what proved to be the winning goal in Pochettino’s team’s third home win of the season, though visiting boss Camacho hit out at the red card handed to his player, accusing him of: “giving in to the pressure, then not having the courage to award us a clear penalty in the second half”. Atletico Madrid are in fourth, ahead of Villarreal who play on Monday, after a 1-0 win over Zaragoza, despite losing Reyes to a red card, with Felipe Luis setting up the winner – on his debut for the club following his summer transfer from Deportivo, who with Zaragoza remain the only team without a win following their 0-2 home defeat by Almeria on Saturday.

Two goals from Fernando Cavenaghi gave Mallorca the win over Real Sociedad, who’ve lost their last three games and sit on four points just above the bottom three, alongside Osasuna, Sporting and Racing, who went down 0-1 to Getafe. 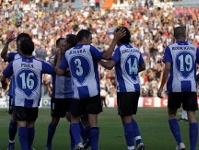