Although he admitted that the team had lacked spark at times against Sporting, Guardiola stressed; “you can’t always produce excellence. The team stuck together and we played at a high level”.

It was a victory built on hard work and the boss insisted: “we played at a high level. We lacked spark, but we kept together. They didn’t have a single shot on target and that is an added plus for us. If we defend well, it’s because we attack well and vice versa. The team stuck together and we didn’t split into attack and defence. You have to take into account that the other team played too and they played very well”.

The boss was full of praise for Sporting’s tactics, explaining: “Sporting played an extraordinary game in defence. When teams sit back and invite you to come at them, you have to go after them and maybe we were missing that ability to go for their second line of midfielders. We came out better after the break, but teams like that are always tough to break down”. 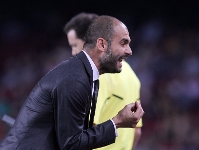 “Sporting are a solid team. They’ve always been a lively outfit who believed they belong in the top flight. Now they have made some good signings – people who know their job on the pitch. El Molinón has a lot of charisma and great fans. They are a team who have plenty of good points. They area finished object and they play really well”.

David Villa was one of the game’s main protagonists with his second half winner and Guardiola reckons: “he gives us a little extra, both as a striker and playing wide and coming into the centre. He widens the pitch for us and we all know he’s a great finisher”.

Finally, Guardiola was asked about the great start to the season Barça B have made in the second division and he insisted: “it’s come as no surprise to me, they have a great coach and staff, as well as a group of players with a great future ahead of them. They have a long road ahead of them and I know Luis Enrique won’t let them sit back. They are a generation who have made the club a lot stronger by making it up into the second division”. 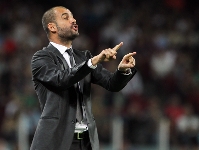 State of the pitch

Guardiola admitted that the Nou Camp surface was: “not as it used to be – it’s had some virus and molds but I know that the experts in charge are doing everything they can to sort it out”.