Barça draw Ceuta in the Cup

Barça draw Ceuta in the Cup

Barça have been drawn against Second B club Ceuta in the R32 of the Kings Cup. The first leg will be in Ceuta and the return leg in the Camp Nou.

Wednesday’s draw was organized so that all the teams taking part in European competitions would be paired with clubs from the Spanish Second B (the third level).

The last time the two sides met in the Cup was in the 2000-2001 season, when Barça eliminated Ceuta 3-0 in a one leg tie in the third round, the goals coming from Alfonso Perez and Kluivert. 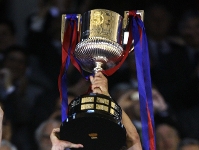 The other R32 fixtures