Josep Guardiola was optimistic about tomorrowís game against Sporting and although his team will have to make do without the injured Leo Messi, he insisted: ďheís virtually irreplaceable, but weíll get by without himĒ.

Guardiola commented: “Messi has some special abilities. Fortunately he’ll be okay in a short time . He’s a strong lad and his bones and ligaments have held up. We’ll hope to have him back in two or three weeks”.

“He’ll be back when he’s ready” 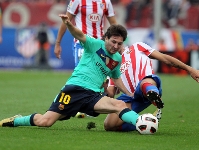 Despite his optimism, Guardiola also warned: “he’ll come back when he’s ready. It’s an injury that can have a number of after effects – if we don’t get him fully cured, it’s something he could carry with him for a while. I don’t know if he’ll be alright for the Rubin Kazan game, he’ll just have to rest till he’s okay again. We’ve not put a date on his return and he understands that perfectly well and I repeat, when he’s alright, he’ll come back”.

Wednesday will be the first game Messi misses, but Guardiola assured reporters: “we’ll look for a way to continue attacking and defend even better. Sporting have had the same manager for some time and that’s a plus. They’ve established themselves in the top flight. They can get to you with two or three quick passes and look to get forward with two or three players really quickly. They are aggressive in that they go and look for goals”.

Guardiola claimed to have: “a lot of affection and respect” for the Sporting boss Manuel Preciado, and reckons that to beat his team” we’ll have to know all about them and see where we can create problems for them and how we can stop them troubling us”.

“Our strength is on the pitch” 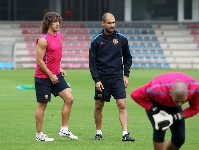 Guardiola also insisted on distancing himself from the recent media rows, claiming: “our strength is on the pitch. The only thing we have to do is try and get better and to keep on winning games. We played really well against Atletico and there haven’t been many such complete games. We’ve had two very good games, but now we have to keep that up - something I’m convinced we can do”.

Guardiola was also quizzed as to changes in BarÁa’s style, but he countered: “we don’t do anything special; it’s just that we are getting to know each other better. We adapt the qualities, but the basic ideal is the same. We try to adapt certain aspects to the strengths of our players and we try and make them adapt too, so that they feel comfortable”.

Guardiola also had words of congratulations for Andres Iniesta on the news of his upcoming fatherhood: “the important thing is that he and his wife are very happy and that their future child is okay. Getting Andrťs back is the best signing of the season. He’s very happy and I hope that this happy event will make him even better and able to get back to his level”.

The boss also spoke of another World Cup winner, Sergio Busquets, explaining: “it’s his third year in the team now and he’s become a regular. He’s a stable player with a very strong character. It’s good for the squad that there is a new generation like him coming through”. 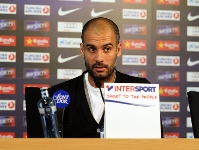 As to his new signings, Guardiola was adamant: “Mascherano has adapted perfectly – we didn’t lose to Hercules because of him or Adriano. We’ll get nowhere with that type of analysis. Both of them are a great help, both off and on the pitch”. David Villa: “will get the goal. He’s scored wherever he’s played and the goals will come for us too”. Guardiola closed with the only negative note, concerning Abidal: “his grandfather has died and the funeral is today or tomorrow. He’ll come back when that is over”. 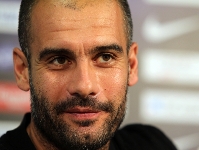 Guardiola also referred to the possible sanction which Ujfalusi might receive after his tackle on Messi on Sunday:“The committee will do what they think is right. Football is a contact sport and there will always be situations like this. When the referees see it they have to stamp it out as soon as they can and they try and do that”.

“Football is speed and there are players who are faster than others, who go in with more impetus and desire. The player, just like anybody who hurts somebody else, feels bad about it. You have to be careful, but it can happen to anybody. Everybody who’s giving their opinions have a responsibility to the fans.” Referring to comments made earlier this year by a Madrid commentator, Guardiola said: “I’m not saying ‘we have to stop Messi by any means possible .lawfully or criminally’, I’m just responsible for what it is that I have said”.

Finally, the boss thanked Atletico Madrid for the way that they reacted after the game: “their President came down to the changing rooms after the game and so did Quique. They behaved really well and were interested in Messi. I also think the apology from the player himself was perfect”.