In an interview with Barça TV and www.fcbarcelona.cat, Javier Mascherano has made it clear that he is feeling welcome at the club. He loved beating Panathinaikos and knows what it means for Barça to play Atlético Madrid.

You’ve been in Barcelona for some weeks now. How are you feeling?
I’m fine. I am pleased that me and my family have been treated so well – in the city, in the street and at the club. I am feeling happy and looking forward to enjoying this great experience.

How are you adapting to your team-mates and the style of play?
I can only thank them. They have treated us as if we’ve been here for ages and although the style of play is obviously different, it’s so much easier with so many good players around you. I am settling in nicely, but I think it’s so much simpler with such high class people and footballers as there are here at Barça.

After your debut against Hercules, Pep Guardiola said he was pleased to see you grasp certain concepts straight away, and that was despite the defeat. Did you feel likewise?
You have to think of the team, not yourself, so I can hardly say I felt satisfied that day. But I stayed clam, I listen every day and learn new concepts, because football is seen and felt differently here. But I’m sure I’ll manage. I just have to change my chip and realise that from the very first day everybody in the squad is ready to lend a hand.

Has Pep asked you to do anything specific? 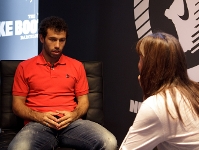 He wants me to play the ball a lot more, because unlike in English football, defensive midfielders here play their part in taking the ball forward. He’s always telling me about positioning and making myself available, and where to be when we’re putting pressure on the opposition. But it isn’t really all that different to what I have always done. It’s more or less the same, just that you play a bigger role on constructing moves.

After the game with Hercules, you said the yellow card conditioned you. Are you worried about adapting to the Spanish game?
I’m not worried, but I have to be careful not to get carded after 20 minutes because that affects you for the rest of the game. I have to adapt, because I’ve spent a long time in a much more permissive league in terms of physical contact, and sometimes you forget that when challenging for the ball and so I need to put a stop on that. But I want to make it clear that it was not an attack on referees here, it’s just that football’s different here.

Unlike on Saturday, against Panathinaikos we saw Barça playing the ways the fans are used to.
I know. I like football and I have watched a lot of Barça in recent years and know what they are normally like. I have to say Tuesday was amazing, and against a big team with good players. But like I said on Saturday, that defeat was an accident, the kind of thing that can happen in football.

To play like that against Panathinaikos when you’re stillń not quite into your rhythm after so little training today – what can we expect from this team? 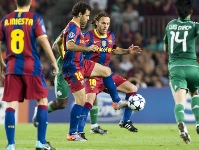 People are naturally expectant after what has been done before. But this will be a tough season, we’ve just had a World Cup, some players have had very little time, and there were two international matches in the first week, which affects how new players adapt to the team. But now the boss has us all together. Now he needs to make sure the older players carry on as they were and the new ones need to learn to adapt to their characteristics.

The Atlético Madrid game is a challenge for you, especially considering Barça have lost on their last visits to the Calderón.
It’s a very important game. They’re a difficult opponent and their confidence has been boosted by winning titles and being top of the league. But it will also be a difficult game for them.

They’re crazy end-to-end games, which isn’t a style Barça like and they can feel unsettled.
Yes, these games have lots of goals, and no team can maintain control of the ball the way Barça likes. On Sunday, I hope we can offer the same level of football as did against Panathinaikos

Have you spoken to your friend “Kun” Agüero? He has played well in recent games against Barça…
I have spoken to him since we were with the national team. He’s a great player, with loads of talent, and very experienced despite his age. I have enjoyed playing alongside him and suffered playing against him. He’s hard to stop. He’s the kind of player that can tip the balance of a game, and I hope he doesn’t do that against us. But as long as we concentrate, it won’t be easy for him. 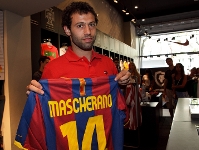