Alves: "The very best Barça is back"

Alves: "The very best Barça is back"

The Brazilian international scored his first Champions League goal for Barça on Tuesday night against Panathinaikos (5-1).

"After our last home game there was a lot of talk. Let’s hope that from now on we can get back to our usual standard. The very best Barça is back – possession, circulation, penetration. When that happens we always get a good result”.

"You must never give up the fight” 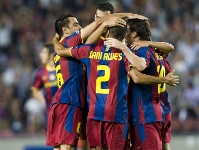 "We wanted to win this match to get rid of the disappointment over what happened against Hercules. We had a bad day. Anyone can lose but you must never give up the fight because that’s our greatest strength. Today the team reacted quickly and came from behind”. 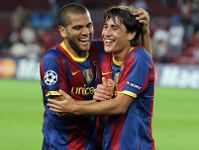 In the final second of injury time, Alves rounded off a fine team performance with Barça’s fifth goal of the evening (and his first for the Club in the Champions League) and for once the roles were reversed, with Messi providing the assist and Alves finishing: “It was a wonderful pass from Leo. For you today, for me tomorrow”.

"It’s our philosophy that let’s us enjoy ourselves so much. We won’t change our style of football just because we have a few bad results. What the boss tells us always influences us. What he gets across to us, what he says…he’s always right. He’s got very clear ideas, he’s an optimist and he makes you believe him. He’s the best coach I’ve ever had or will have”.

Here’s what some of the other players had to say after the Panathinaikos game: 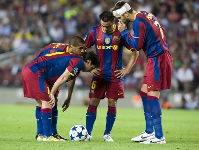 "The team needed the win after an unexpected defeat and we are happy because we all saw the Barça we want again”.

"I’m pleased about the result, the performance and the way the team is playing again”.

"Sometimes things don’t come off. On Saturday, it all went wrong. There’s no need to worry – that’s football. Today it all went right”.

"We’ll be up there competing for titles".

"We’re all necessary here – that’s what Pep always says. Today some of us played and on Sunday others will play, and so on”. 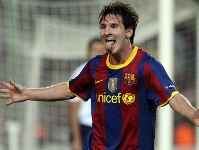 "We had to lift ourselves and we did very well”.

"We went one goal down but then we ended up playing very well”.

"We didn’t do things right the other day but today we moved the ball around quickly”.

"We knew that people had some doubts and we had to play well to banish those doubts”.

"I was really angry with myself for missing the penalty and the way I took it”.

"I’m happy with the team performance, the win and the way things worked out”.

"I’m getting used to being praised by the boss and it makes me very happy”.

"It was a good game. It was important to begin well in the Champions League and we came back from a goal down”.

"The main factors were possession and finding space down the middle, which didn’t happen on Saturday”.

"The perfect game would have been not to concede a goal”.

"You never like conceding a goal but as long as you win it doesn’t matter”.

"We don’t have a good away record against Atletico. They’re in form but I hope we can win”.

"It’s good to get a win after a defeat. It was a top class performance of the kind people here like. Today we played very well”.

"We had a lot of chances and we ended up with five goals but we could have scored more”. 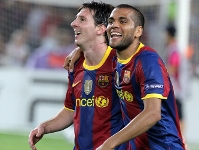 The team will train behind closed doors at the Club’s training facilities at 11 am Wednesday. After the session, Busquets will give a press conference.