A mere two matches into the league campaign and only two clubs, Atletico and Valencia, can boast a one hundred percent record. Meanwhile, at the other end of the table, Levante and Racing are still without a single point.

Two goals from Diego Forlan and Tiago gave Atletico Madrid a narrow win in San Mames against Bilbao and kept them at the top of the table ahead of the visit next weekend of FC Barcelona. A late goal from Bilbao’s Spanish international forward, Llorente, was not enough to compensate for a workmanlike but rather lacklustre performance from the Basque outfit. Atletico’s young Argentinean forward Kun Agüero picked up a leg injury and had to go off early in the second half. He remains a doubt for the match against Barça next Sunday.

Meanwhile, Racing put up a spirited fight in the first half of their match away to Valencia but the home side took the lead seconds before the break and went on to control the second half and take all three points.

Sevilla had plenty of chances to win their match against Deportivo in the Sanchez Pizjuan but a combination of bad luck and a well-organized defensive display from the visitors kept the game goalless. Sevilla move into third place with four points.

Real Madrid produced a hesitant performance in their home league debut against Osasuna but a goal from Portuguese centre half Carvalho was enough to give them all three points.

Perhaps the most astonishing display of the weekend came in Zaragoza, where visitors Malaga scored no fewer than five goals in the opening 34 minutes! The locals managed to come back with three goals but the disaster of the first half hour was too much to overcome.

Espanyol also suffered a painful 4-0 defeat away to Villarreal despite the return to the side of Ivan de la Peńa after a 10-month injury layoff.

Sporting took all three points in a poor match at home to Mallorca (2-0) while Getafe had little trouble in dispatching Levante 4-1 to leave the Valencia-based team propping up the table with no points from their two games. 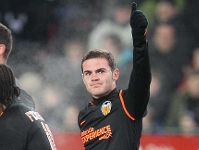 Week 2 finishes on Monday evening with the match between Almeria and Real Sociedad. A win for Real Sociedad would put them joint top with six points.