Dani Alves believes that critics of FC Barcelona should remember the start to the 2008/09 campaign when the team started slowly and were given a bad press only to go on and win the treble.

The Blaugrana full-back was reacting to the defeat by Hércules and thinks that the similarities between this year and two seasons ago are valid. "There is no need to become angry or to despair," he explained after training on Sunday morning. "It is not how you start a season, but how you finish one. We were criticised a lot during the club's most successful ever yea but we went on to finish very well." 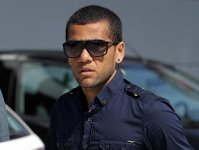 Reflecting on the Saturday reverse against Hércules the Brazilian recognised that things did not go well. "We had a bad day and when you have a bad day you do not win," he continued. "However, it is better to lose now then to lose in the final straight. I hope we do not drop any more points at home though and that the points that we have now dropped end up costing us. We just have to stay calm and know how to come back."

Barēa had little time to dwell on their first defeat as the focus has already turned to the Champions League opener against Panathinaikos on Tuesday evening. "We are always motivated in this team," Alves stated. "Only winning counts here and when we do not win we are angry about it. Whoever we play against we are always motivated to win and the game on Tuesday will be no different. We will go out there with the same desire, but we hope that we can be a bit better." 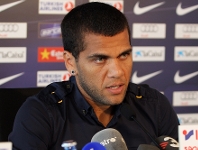 On the philosophy employed by the Blaugrana there should be not thought of trying to change in order to beat teams that play with a more basic style, Alves believes. "We have our own way of doing things and we do not think about changing," he explained. "If we can win by three or more goals then we will do that. It is not only about scoring though, it is about adding points, although here we play to win and entertain.. That is our philosophy and it will not change. It is a philosophy that has done us a lot of good." 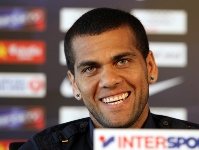 Dani Alves was asked about renewing his contract at FC Barcelona and is calm about the situation. "It does not worry me," he said. "Whether I renew or not I will continue to play with the same professionalism that I have done until now. I want to put that to one side because we have to focus on our job. If I have to renew that that will happen, but it is not something that is going to bother me."