Abidal’s 31st birthday will not be the best he has ever had, for the defender’s side was stunned on home turf by little Hercules. The Frenchman felt they had lacked fluidity, and likes his colleagues, was frustrated with the result.

"We normally play faster, and we couldn’t get the ball circulating" said Abidal. “It is all our fault, but it’ll be a different game on Tuesday against Panathinaikos. We have to forget this one as quickly as possible".

Abidal does not feel that this defeat has to affect them ahead of their European debut. "We always play to win at this club and on Tuesday we’ll have another chance to do so", he said. Against Hercules he is convinced that "if we had scored in the first half I’m sure we’d have gone on to win". 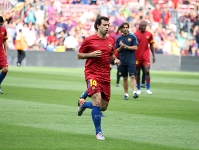 Asked about his new tea mate Mascherano, the Frenchman said "he has all the right qualities to play for Barça. He is going to need to adapt to a new league, but he is already showing in training just how good he is”.

Valdés: "We have to carry on the same" 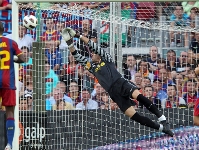 The goalkeeper said that "we tried everything but it wasn’t to be. We have to carry on just the same.” However, he did admit that “we have to analyse the things we didn’t get right and correct them for the next game ".

Iniesta: "There is a long way to go"

Nobody likes to lose, and Andrés was clearly disappointed after the match. "The team tried everything right until the end, but we couldn’t do anything else. We’ll get over this and Tuesday is another day.” He added that “we have to get through this together. We just have to keep training and improving day by day”.

On Mascherano, he said "little by little he’s adapting to the mechanics of the team and that makes it work better. It is important for him to settle in”. 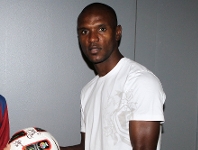 After a thumping clash with rival goalkeeper Calatayud, Gerard Pique cur his head and finished the game with a bandage on a head. The Catalan managed to complete the match and at the end of the match received six stitches.”