Dani Alves expressed his satisfaction with this afternoon’s game against Barca B, which put an end to the last few days of training for the Brazilians in Barcelona and insisted that he is now focussed on Saturday’s league game against Hercules.

Dani Alves spoke to Barca TV and www.fcbarcelona.cat after the game and explained: “it was a good training session for both sides. For us it was important to wind up the last few days with a win and both teams played well”.

Focussed on the league 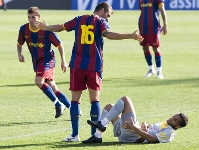 Alves was optimistic about the new era under boss Mano Meneses. “it’s a new project with a lot of young players. We’ve just started being together and we are starting to understand the way we are to play. I think we are on the right track”.

With the international break now over for him, Alves is fully focussed on Saturday’s game against Hercules: “we started well against Racing and now we have to keep that up in our home debut on Saturday”. 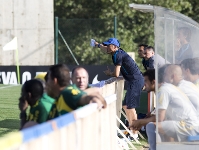 Barca B coach Luis Enrique was also happy with the experience, claiming: “it was an interesting test against a demanding opponent. It was useful helping us to get fit and try out a few things. Their three goals for example came from things that we need to improve”.

Barca B have made a brilliant start to the season, but he was cautious: “we played very well in the second game, but we could have easily lost the first one. It’s important to get used to playing at this level and finish well. We aren’t in any rush ,we just want to observe and do things properly”. 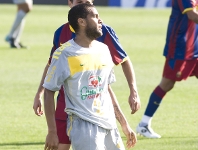 Not many players get the chance to face Brazil and Ilie Sánchez expressed the excitement of the B team players who played today: “it was very positive, even though we made mistakes which you just can’t do against players like this”.