Last session and break until Tuesday

Last session and break until Tuesday

Barça have held the third and final training session in a week marked by the absence of the internationals. 12 players were involved, six from the first team and six from Barça B. Puyol and Jeffren did recovery work.

Like on Wednesday, and with Josep Guardiola also away at the Eilte Coaches Forum in Nyon (Switzerland), Tito Vilanova took charge of the training session on pitch number 2 at the Ciutat Esportiva Joan Gamper. 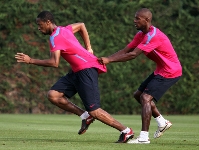 The FC Barcelona assistant manager work with six first team members –Abidal, Maxwell, Keita, Adriano, Alves and Pinto- , and six from Barça B –Masip, Carlas, Martí Riverola, Benja, Víctor Vázquez and Edu Oriol-. Dani Alves, who from tomorrow will be working with his Brazilian colleagues at the Ciutat Esportiva, has voluntarily accepted to train with Barça for these three days.

Recuperation for Puyol and Jeffren 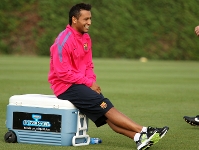 Both Carles Puyol and Jeffren have worked to recover from their respective injuries. The Barça captain was revealed to have a leg injury on Wednesday, while Jeffren is out for 15 days for treatment on fibres in the abductor in his left leg. 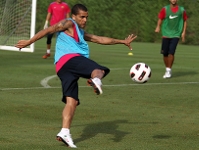 The players now have four days off and won’t be back together until Tuesday, when they will start preparing for the league visit of Hercules to the Camp Nou on Sunday.