Wednesday morning’s training session was led by assistant coach Tito Vilanova, who worked with a group of thirteen players – six from the first team and seven from Barça B.

The second of the three training sessions scheduled for this week was a sparely attended affaire due to the exodus of international players. In the absence of Josep Guardiola, the session was led by his left-hand man, Tito Vilanova. 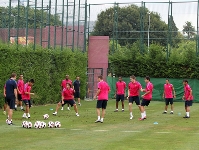 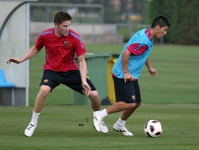 For the second day running, Brazilian international Dani Alves reported voluntarily for training, despite having two days off before joining up with the Brazil squad on Thursday.

Medical tests for Puyol and Jeffren 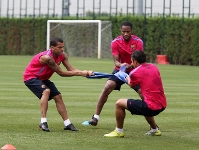 Carles Puyol, who limped out of a Spain training session on Tuesday evening, was present at the training grounds for a series of medical tests on his problematic left leg. Jeffren was also seen by Club doctors. 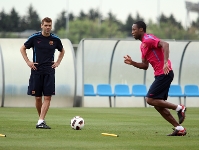 The players will report at 9 am on Thursday for the last session of the week, which will be open to the press for the first 15 minutes. Training will then resume on Tuesday.