Javier Mascherano could not hide his delight at joining FC Barcelona as he was presented to the media after completing his move from Liverpool on Monday evening.

The Argentinian midfielder passed a rigorous medical and then donned his new colours in front of the fans before heading to the Sala París where he spoke to the press. “I am very happy to be here,” he stated. “I have been able to obtain the dream that I had pursued so much. At last I will play where I wanted to. When you are surrounded by such great players it makes it so much easier for you.” 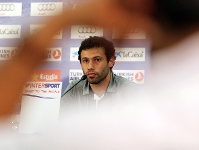 Flanked by Sporting Vice President Josep Maria Bartomeu and the Sporting Director of Professional Football Andoni Zubizarreta during the conference Mascherano explained why he wanted to change clubs. “When I take a decision it is because I am sure about what I want to do,” he continued. “When the best team in the world wants you the decision is certain.” Asked about possible interest from Inter he added: “I know that Rafa Benítez appreciates me, but Barça showed that they really wanted me.”

Choosing the Blaugrana was easy Mascherano said: “For the philosophy and the desire here to continue winning. I have not just come from a holiday, I am here to play football and take advantage of a once-in-a-lifetime opportunity.” 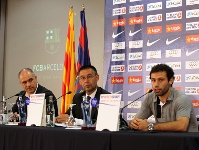 The player known affectionately as ‘El Jefecito’ (the Little Chief) knows that competition for places will be high. “I have total respect for the players that have been doing so well,” he commented. “I know that in midfield there are three World Cup winners and I am proud to learn from them and to enjoy playing next to them. I am going to play with players that I admire and I am sure that some day I will be able to say that I grew at this club.” On his new coach Mascherano explained: “I know that Pep Guardiola has his own era here and knows the club very well and what my position is.”

Lionel Messi will be one friendly face in the Barça squad: “He will be a great help,” Mascherano said. “I am very fond of Messi and he has always wanted me to come here. He explained to me what life is like here during the World Cup Finals.” 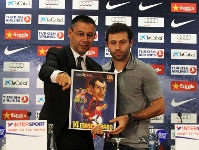 “I am a defensive player but I can bring other things,” the midfielder continued. “During my career I have played in other positions and I have always done what is required. The coach will decide.” When asked if he compares himself to Touré Yaya he stated: “he is a great player that made his mark, but I am not here to replace anyone because Barça have signed me because what I have done. I can bring different things to Touré. Not better or worse, just different.”

Bartomeu then revealed that Mascherano had also done his part to make a deal possible. “To come here he has made a personal effort,” the director explained. “He has renounced 20 per cent of his salary to help the transfer.” Zubizarreta added: “He can play in many positions and tactically gives us many options.” 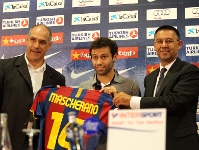 Javier Mascherano confessed that his nickname ‘el Jefecito’ was given to him by the press. “At River Plater there was Astrada and he was ‘el Jefe’ and there saw me as his successor and it stuck,” he said.