Spanish League Round up – Week One

Spanish League Round up – Week One

However, it wasn’t all bad news for the minnows as Real Sociedad celebrated their return to the top flight with a 1-0 win over one of last season’s Europa League qualifiers, Villarreal.

Levante took an early lead at home to Sevilla – still stunned by their Super Cup defeat against Barça and an early exit from the Champions League – but held on for just two minutes before Abdoulay Konko made it 1-1. Sevilla never looked back from that moment and went on to win 1-4, with French defender Konko, who was brought in to replace Barça’s Dani Alves, getting another. 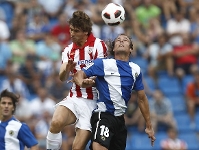 The third of the promoted sides, Hercules, managed to restrict Bilbao to just one Fernando Llorente goal as they too slipped to a home defeat in their first match back in the first division for many years.

Life for Valencia without David Villa and David Silva started well with a 1-3 win over Malaga on the Costa del Sol. The man who was brought in to replace Villa, Artiz Aduriz, enjoyed a dream debut scoring the first goal after ten minutes.

In contrast to free-scoring Barça, Sevilla and Valencia, Jose Mourinho’s new-look Real Madrid struggled to break down a Mallorca side decimated by the club’s financial problems and had to settle for a goalless draw as Ronaldo and Higuain both failed to take their chances.

There were no goals for the 11,000 fans to enjoy in the Riazor either, as Deportivo were held 0-0 by visitors Real Zaragoza. It was the same story in Pamplona where Osasuna and Almeria fought out the third of the weekend’s goalless draws.

Meanwhile, it was a good day all round for the city of Barcelona as Mauricio Pochettino’s RCD Espanyol romped to a 3-1 home win against Getafe. 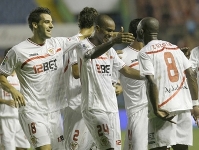 Round one of the Spanish League finishes on Monday evening with the match between Atletico Madrid and Sporting Gijon.