The Nuevo Sardinero is one of Leo Messi's favourite grounds for scoring and the Argentinian has bagged four in his last two visits – one of which was Barca's 5,000th league goal. 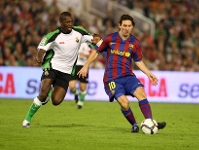 Messi scored twice in last season's 1-4 win at the Nuevo Sardinero, rounding off a great performance with the second goal- a drive from the edge of the box, and the fourth, a delicately placed shot. The two goals took Messi to five for the season, leaving him as the leading scorer in the league, ahead of Cristiano Ronaldo and David Villa. 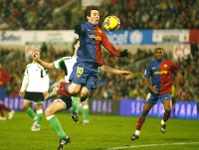 On February 1st 2009, Leo Messi wrote his name in the club's history by scoring Barca's goal number 5,000 in the Spanish League. That goal in the 1-2 win also gave Barca three valuable points in their bid for the title. Strangely enough, Messi's goal was scored on the same ground that Manuel Parera had recorded the club's first ever goal in La Liga in 1929.

Messi had come on on the hour mark when the team were 1-0 down to a Zigic goal and he needed just five minutes to equalise, before scoring the winner 10 minutes from full time. Barca finished that match with 9 men after Marquez and Piqué were both sent off. 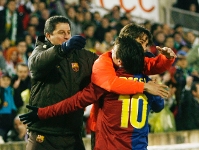 Two goals at the Nou Camp

Racing de Santander have also suffered from Messi's goalscoring at the Nou Camp, where he scored against them in the 2005/06 season, a feat he repeated three years later in the 1-1 draw in the treble winning season.