Pep Guardiola is as ambitious as ever for his team and despite winning virtually every possible title over the last two years, he insists that he can get even more from his team, who “with humility” can go on to win many more titles.

Saturday’s exhibition against Seville served as a demonstration of what Guardiola expects from his players and he admitted: “we played at a very high level and the challenge is to continue to repeat that intensity and attention”. 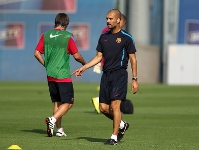 For Guardiola: “we have to play with humility. In the games that are supposedly easy, I want to see us running more than our opponents, making as much effort as we did tehthe very first day”. Guardiola is also well aware that there can be no sitting on their laurels for his team and insists that this season: “we have to go back and win everything all over again”.

Many might ask how you can possibly improve a team that has won everything, but the boss has his objectives and plans for the new season and believes: “there are always things to improve – how players play together, the quality of our training, our mental strength..... I believe we can do things better”. 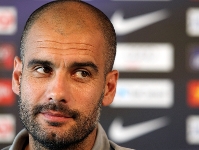 Saturday's win against Seville didn't surprise Guardiola (“we've come back so many times in the past”) and he was especially proud of his players, claiming: “we came into the match in a difficult situation because we'd had so few chances to train together, but it was an excellent game and the players responded really well.
Milan

Looking to Wednesday's 45th Joan Gamper Trophy, Guardiola was clearly happy at the quality of the opposition his team will face: “I think there are few other teams who could dignify our tournament as much as Milan. We're very proud they are here and it'll be a good test for us and a chance to look at a few things”. 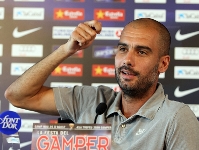 Wednesday will give the fans a chance to see Ronaldinho again. This time in a Milan shirt. Although the Brazilian had left by the time he took over as boss, Guardiola knows full well what the arrival of the Brazilian meant for the club: “he was key reference point for the change the club needed. When he arrived, the club was a bit down and I 'd seen nothing like it when he came in – he was so decisive. His physique, his skill... he was a real help to this club”. The boss also expressed his certainty that the fans would give the Brazilian star a great reception on his return to the stadium on Wednesday.