FC Barcelona won the Spanish Super Cup for the ninth time in the club’s history on Saturday evening and a raft of new stats and records came out of the 4-0 triumph.

► Seven of the eight Barça players to have won the World Cup last month made their first appearances with only Carles Puyol remaining on the bench.

► No team has ever before won the Super Cup after losing the first leg by two goals. 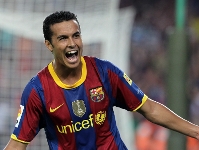 ► The first goal against Sevilla was similar to the one that opened the scoring against Real Valladolid at the end of last season while Lionel Messi’s fourth was reminiscent of his effort in the 2-2 draw against Valencia two seasons ago.

► Maxwell won the ball back more than other player doing so ten times.

► Xavi, as usual, was the most involved player as he made 134 passes.

► Víctor Valdés had the least touches as Sevilla had just one shot.

► Dani alves put in the most crosses with ten while Xavi managed to put the ball in the area four times.

► Barça have beaten Sevilla 4-0 on three out of the last four meetings with the Andalucian outfit in Camp Nou.

► Puyol, Xavi, Andrés Iniesta, Valdés and Messi have all now won the Spanish Super Cup on four occasions each. 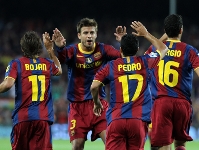