Sandro Rosell enjoyed his first trophy win as president of FC Barcelona after Pep Guardiola’s side bounced back to beat Sevilla on Saturday evening and retain the Spanish Super Cup.

The new Camp Nou supremo was in the director’s box as Lionel Messi scored a hat-trick in a 4-0 win and he was able to go down to the pitch after the game to be a part of the celebrations. 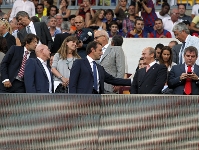 “I am very happy and content, but above all I am happy to see such a great team,” he said. “The first half was spectacular. I am delighted to see Guardiola and his players continue to do such a good job.”

Rosell was always confident that the team could turn the Super Cup tie around after they were beaten 3-1 by Sevilla in the first leg a week earlier. “I had a feeling we could bounce back and win the first trophy,” he explained. “I felt fantastic and just like another supporter.” 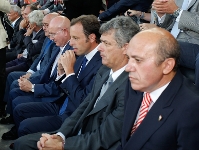 After such a glorious night in Camp Nou the president stated that everything went well. “I cannot ask for more from Pep, nor from the players or the fans. They were all fantastic,” he said. “It could not have been better. We have a great coach, great players and great supporters. The public lifted the team.”

Looking ahead to the Trofeo Joan Gamper game against AC Milan on Wednesday Rosell added: “I am very optimistic and full of hope. The Gamper will be a day to celebrate Barça.” 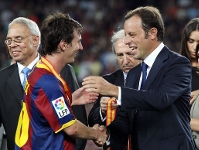 Andoni Zubizarreta, Barça’s sporting director of professional football, reflected on Zlatan Ibrahimovic’s situation. “He is a Barcelona player and all the players will be used because it will be a long season,” he explained. “Our job does not finish on August 31 and we are also looking for teams to loan players to. If there are signings then they will be to strengthen the squad and improve it.”