Gerard Piqué is preparing for his third season with the FC Barcelona first team after what has been a spectacular return to the club two years ago when he came back from Manchester United.

The 23-year-old was re-signed by the Blaugrana on May 27, 2008 having left to try life in England four years earlier at 16. During his spell with United the central defender spent one season on loan with Real Zaragoza. Piqué, who holds Barça member number 48,212, then fulfilled his dream of playing for the Catalan club at the highest level and has exceeded all expectations. 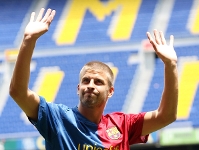 Since his debut for the club in a Champions League Play-Off game against Wisla Krakow Piqué has become one of the most highly-rated defender in the Spanish league and around the world. His powerful physique, awareness, technique and organizational abilities have made him into a firm favourite.

During two seasons at Camp Nou he has played in 86 official games and shown how comfortable he is leading the team by linking defence with the attack so effortlessly. 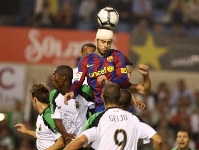 Piqué is among the lowest recorded defenders to have received a card during his time at Barça as he has picked up just 20 bookings and been sent off just once.

Going forward he has also shown how adept he can be in front of goal with seven to his name. Among his personal favourites must be the sixth goal in the historic win against Real Madrid in the Santiago Bernabéu, the third goal against Espanyol in the Copa del Rey of the effort against Inter in the Champions League group stages.