FC Barcelona face a stern test in their first game back in Camp Nou since the club celebrated winning the league title back in May as Sevilla visit for the second leg of the Spanish Super Cup with a two-goal lead.

Three months after the last home game, when they beat Real Valladolid 4-0, Pep Guardiola’s side will be hoping for a similar scoreline when they entertain the Andalucian outfit in a contest for the first trophy of the campaign.

In their first game in Camp Nou in pre-season Barça have won eight in the last ten years. 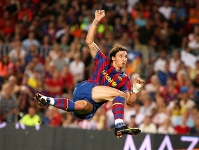 Three times in the last years the Blaugrana’s first game back after the summer break has been in the Spanish Super Cup. Last year Zlatan Ibrahimovic was the star attraction for the home fans as he helped Barça to beat Athletic Club and lift the silverware while in 2006 there was a local derby as Espanyol travelled across the Ciutat Contal for a game the hosts won 3-0. Some 12 months earlier Real Betis had been the away team as they beat Barça 1-2 on their own patch to win the trophy. 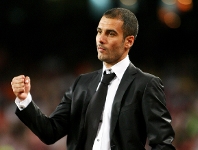 Pep Guardiola made his home debut as coach when Barça took on Wisla Krakow in a Champions League Play-Off. The road to Rome began in August 2008 with a 4-0 win. Louis van Gaal’s second spell in charge had begun with a match against Legia Warsaw and goals from Frank de Boer, Juan Román Riquelme and Phillip Cocu saw the Blaugrana to a 3-0 triumph. 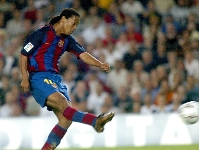 Barça fans have become accustomed to seeing Sevilla as their team’s first opponents as they have been regular starters. Ronaldinho netted his first goal against the Andalucian outfit in the ‘night of gazpacho’ when the game kicked off after midnight, while in 2004-05 Ludovic Giuly and Henrik Larsson scored to give Barça a 2-0 win. 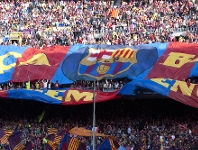 In the last ten seasons Barça have won eight of their first games at Camp Nou while drawing one and losing the other. The eight wins have brought about six trophies.