Nine B team players in squad for Seville

Nine B team players in squad for Seville

Pep Guardiola has called up 19 players for the trip to Seville, with 10 of the first team squad joined by 9 players from Barca B, including keepers Mińo and Oier. None of the club’s World Cup winners are included in the squad for the game.

For the first official game of the season, Guardiola has called up 19 players, though he will have to leave one of them in the stands before kickoff, as the Super Cup only allows for seven subs. 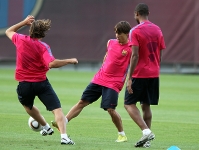 As well as the Spanish internationals, Hleb, Víctor Sánchez and Cáceres are also left behind, as is the injured Pinto, whilst the five other internationals who played midweek- Alves, Messi, Ibra, Jeffren and Bojan all make the trip.

New man between the posts

Of the nine Barca B players, five could be in line for a debut with the first team - Mińo, Oriol Romeu, Sergi Gómez, Sergi Roberto and Nolito. With Pinto out and Valdes not travelling, either Mińo or Oier are guaranteed a start in goals.

The first team squad players who won’t be travelling to Seville will have morning and evening training sessions on Saturday whilst Víctor Vázquez, Fontŕs, Bartra and Riverola will train with Luis Enrique. 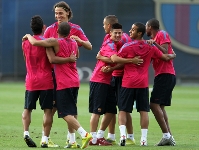