Abidal looked comfortable playing at centre half in China and with Piqué and Puyol still to train, the Frenchman provides Guardiola with a useful option at the heart of the defence alongside Milito, not just on Saturday, but also throughout the seaso

Guardiola has just three centre backs on the books, but Abidal has quite a bit of experience playing there with France: “I like playing there and although I do play there with France, it’s tactically different with Barca”. Abidal explained that after the China game, Guardiola pointed out a number of things he needed to rectify, though his general feeling was positive.

Determined to work hard for a win on Saturday 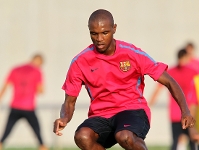 Looking forward to this weekend, Abidal reckons: “it’s difficult for us to prepare games like this. There are a lot of players missing and some of them have had to fly off again after the Tour. But those of us who are here have to be at our best for the game on Saturday We are a group and we have to all do what we can to help the team Those of us who are here will be working hard and the others will be thinking about us because they know how important it is”.

Praise for the youngsters

During the Tour the young B team players played a big part with so many first team players missing and Abidal reckons: “I think that they are talented players who have shown that they can adapt well to the boss’ tactics and Barca’s style of play. I’d love to see them form a part of the first team, but that doesn’t depend on me. They just have to keep on working hard and we’ll see what happens”. 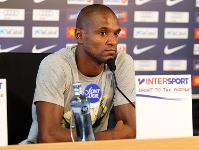 Abidal hasn’t been called up to the French squad this week and he admits: “it’s a punishment”. He has been called to testify in front of the French Federation on August 17th to give his views about what happened in South Africa and he claims: “I don’t know if there will be any more sanctions. I’ll listen to their questions and tell them what I think”.