The FC Barcelona squad arrived back in the Catalan capital on Monday morning after completing their pre-season trip to Asia.

After beating Chinese side Guoan in Beijing the players embarked on a 12-hour flight home and the Turkish Airlines plane touched down at 07:40 CET.

The squad were able to sleep during the trip but that will not prevent jetlag setting in and Pep Guardiola is set to allow them time to rest and recuperate before continuing with training. 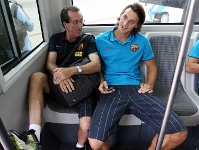 Tuesday evening will be the players’ first workout back at the Ciutat Esportiva Joan Gamper, but only eight first-team stars will be in attendance due to the round of international friendlies. José Manuel Pinto, Maxwell, Adriano, Seyoud Keita, Éric Abidal, Víctor Sánchez, Gaby Milito and Andrés Iniesta will all be available as preparations for the first leg of the Copa del Rey against Sevilla gather pace. 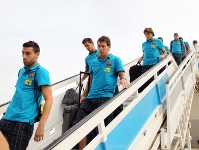 Before the training session on Tuesday evening Éric Abidal will be present at a press conference.