Juan Antonio Samaranch was honoured before the game in the Bird’s Nest Stadium this afternoon as Beijing celebrated the second anniversary of the 2008 Olympic Games.

The game had a strong Olympic symbolism and the figure of Juan Antonio Samaranch, Honarary President of the International Olympic Committee and Barça club member was to the fore before the game as he received homage from the Chinese public. 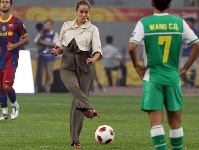 A video montage of some of the most important moments of Samaranch’s life, including his announcement of Peking’s successful 2008 bid, was shown in the Stadium before the game and his granddaughter Anna Eugčnia Gras Samaranch, travelled to the game from India to kick off the game. The fans gave her a warm welcome in a city where Samaranch is held in very high esteem. 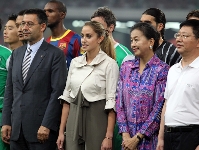 Nest not used too often

The Bird’s Nest has not been used too often for sporting activities since the Olympics: the Italian Super Cup between Lazio and Inter Milan was played there in 2009 and the last game before Barça’s appearance saw Birmingham City beat Gouan 0-1 on July 21st this year.