Messi back at Bird’s Nest

Messi back at Bird’s Nest

It’s been nearly two years since Leo Messi last stepped out onto the pitch at the Bird’s Nest Stadium. On that occasion he came away with an Olympic gold medal. Tonight he’ll be hoping for another win.

Leo Messi won the hearts of many Chinese fans at the 2008 Olympics, when his brilliant football so impressed the locals. Since then, his popularity has grown even greater - something that’s been obvious from the reception he’s received during his four days in Beijing with Barca.

After two disappointing years without a title, the Olympics proved to be a turning point for Leo Messi. Even though the then new boss Pep Guardiola had the right to call the Argentinean up for a Champions League qualifier, he let his young star go to China for the Games and in many ways is still reaping the benefits from that decision. 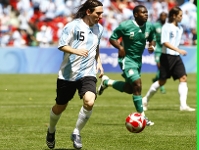 Following on from his Olympic gold, Messi became the World and European Player of the Year and won seven titles on the run with Barca. The Bird’s Nest Stadium and the final where he set up Di Maria for Argentine’s winning goal, saw the start of a great run for Messi and today, nearly two years later, he returns to the scene of his triumph to again thrill his Chinese fans.

Messi is set to play a little longer than the 15 minutes he put in in Korea. After a few more days training, Messi should be able to last a little longer and since he scored twice in his quarter of an hour in Seoul, the fans will be hoping he’ll be able to reproduce some of that tonight. 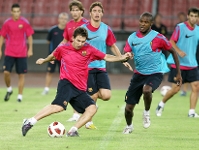 Josep Maria Bartomeu has confirmed that the club will continue to organise pre-season tours abroad, although he stressed the importance of being able to count on the whole squad: “we have to tour, it’s a great opportunity for the club, It’s true it can create some inconvenience at times, but we just have to organise that better”.

The pre-season stages will, however, primarily be held in Catalonia, always depending on the coaching staff’s recommendations.