Pinto: “It is an important chance for me"

Pinto: “It is an important chance for me"

José Manuel Pinto has stated that he is ready to try to take advantage of his chance to play in the first leg of the Spanish Super Cup against Sevilla as Víctor Valdés has been called up by Spain for an international friendly.

Before training in Beijing on Friday the goalkeeper explained: "We will not have Víctor with us and it will be an important opportunity for me," he said. "I now have to prepare and continue to train hard ahead of the game." League champions Barça are due to meet Copa del Rey winners Sevilla in the opening game of the two-legged affair in the Sánchez Pizjuán on August 14. 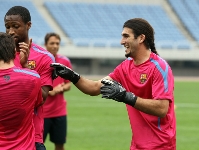 Spain boss Vicente del Bosque has included Valdés in his squad for the friendly against Mexico in the Azteca on August 11, along with six other Barça stars, and that means that Pinto is in prime position to play for the Blaugrana. "We will be without seven important players, but we have to accept it and we need to think about how we will play without them," he explained. "We will still have total belief in ourselves." 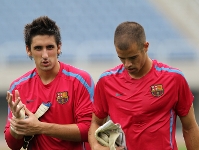 During pre-season Pinto has been working closely with the youth team goalkeepers and he is impressed. "Rubén Mińo like Jordi Masip and Oier Olazábal have great quality," he stated. "In that sense the Barça youth ranks is taken care of and has good keepers." 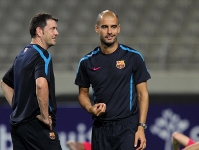 After seeing previous goalkeeping coach Juan Carlos Unzué leave to take over at Numancia this summer Pinto has not wanted to compare him to successor Carles Busquets. "It is like comparing two players," he said. "Each one has their own things and different qualities."

Reflecting on the first goal that he conceded against the K-League Select Xi in midweek the keeper added: "The bounce surprised me because the pitch was hard, but it is no excuse. The ball went over my boot and I was not sure enough." 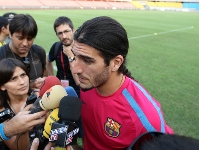 FC Barcelona’s players were put through an intense training session on Friday afternoon in Beijing. The coaching staff focused on physical exercises before setting up a game on a small pitch. Most of the players took the morning off and then reported back to ensure that they continued their pre-season preparations. Goalkeeper coach Carles Busquets chose to don the gloves as he took part in one of the games as Pep Guardiola needed four custodians.