Despite a busy training schedule, Ibrahimovic made time for a question and answer session with Korean fans organized by Nike. The event was streamed live on the Internet.

The Swedish striker spent 15 minutes with a small group of fans – the winners of a competition organized by Nike - in the Mayfield hotel & resort in Seoul. 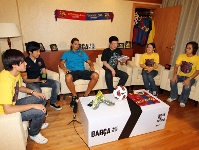 The whole scene had a Barça flavour, with Club scarves and shirts very much in evidence. Zlatan Ibrahimovic answered the questions put to him by three young Korean fans, all of them wearing the Barça colours. The whole event was broadcast live on the internet, enabling other fans to interact and give their opinions on the player’s comments.

“I’m at the best club in the world”

The Barça striker spoke about his youth, his interest in martial arts (he loves watching films with Bruce Lee and Jackie Chan) and, of course, football. Asked about his future with Barça and his move from Italy last year, he emphasized: “I’m at the best club in the world. In Italy I’d won nearly everything. I needed a big challenge. It was a great move”. 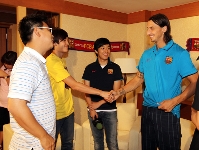 Asked about Jose Mourinho, the former Inter coach and now the man in charge at Real Madrid, he echoed his warm words at the press conference in Oslo: “It’s a great challenge for Mourinho. He’s the best, or one of the best coaches in the world. I don’t believe in Real Madrid but I do believe in Mourinho.” 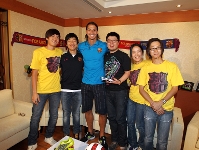 Zlatan was also asked to compare football in Spain and Italy: “Football is more tactical in Italy. In Spain it’s more attacking, especially at Barça”. However, he has fond memories of his time with Juventus and Inter: “I learnt a lot in Italy. It’s where I became the player I am today”.