Training focuses on the physical

Training focuses on the physical

The players were back to work in Seoul on Tuesday in a training session with the emphasis very much on the physical aspect. However, Alves, Messi and Adriano spent part of the session exercising separately from the main group.

On arriving in the capital of South Korea, the players were treated to a relatively light training session to overcome the effects of the long flight. However, on Tuesday, manager Pep Guardiola decided the players were ready to return to the same type of training routine they had been following in Barcelona.

The weather was hot but the sky was cloudy, producing rather uncomfortable humid conditions – not unlike the weather in recent days in Barcelona. The players worked out for about 90 minutes, starting with exercises to strengthen the calf muscle. 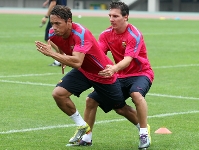 The toughest part of Tuesday’s session centred on circuit training combined with ball control and shooting, with Pinto, Oier and Mińo taking turns in goal. Meanwhile, on another part of the training grounds, Messi, Alves and Adriano did specific work designed to ease them back to full fitness. For Messi and Alves it was their second training session together with the rest of their team-mates.

The final part of the session was dedicated to practice matches played on a reduced pitch. Alves, Adriano and Messi rejoined the main group for this part of the session to work on pressing and recovering possession. The session finished with the usual stretching exercise. 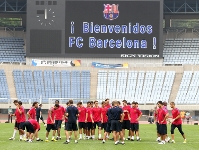 The players were greeted in this first public session by the words ‘Welcome FC Barcelona’ on the video scoreboards of the Bucheon Stadium, but the stands were empty. However, the afternoon session should attract plenty of people from the various sponsors.

The 28 players will train again later in the day in the Sangam World Cup Stadium, the match venue. 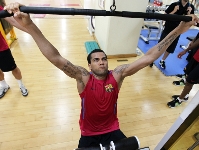