Lionel Messi is keen to put Argentina's inability to win the World Cup behind him and help FC Barcelona to secure more trophies in the new season.

The Blaugrana star was main attraction as the squad landed in the South Korean capital Seoul after he and Dani Alves returned from holiday in time to travel on the club's tour of Asia. 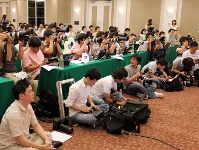 After helping Barça to win four trophies during the 2009/10 campaign Messi hopes he can help the team maintain winning ways. "The objectives are the same every year," he said. "We want to win everything. We know that is difficult but we have a great squad to be able to do it. Then we will see how things go."

Spain's success in the World Cup should help lift Barça too Messi believes. "There is no added pressure and the world champions will return with an ever greater desire because they are winners. We want to continue to win things." 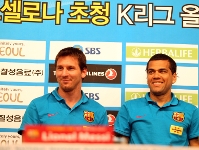 Asked to reflect on the World Cup Finals with Argentina this summer Messi continued: "It did affect me a lot because I did not expect to lose against Germany. But that is over and nothing more can be done. Looking back for too long would be a mistake." 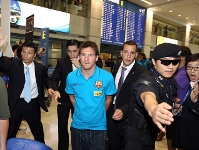 Andrés Iniesta and Xavi could challenge Messi for the coveted Ballon d'Or: "It would not bother me if they won it because they both deserve it," he said. On Cesc Fŕbregas' situation he commented: "It would be a pleasure to play again with Cesc. If he comes then he would have no problem adapting." 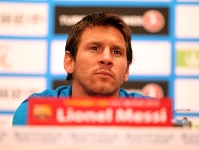 After a summer of flying between continents Lionel Messi is again having to cope with jet lag after he travelled with the Barça squad to South Korea. "I do not even know what time it is," he joked after landing in Seoul.

"We are tired after the long trip and we just want to rest a bit before we play," Messi continued. "I want to begin pre-season though and play in order to reach peak fitness."