Mįrquez: “I will always be a Barca fan”

Rafa Mįrquez officially announced his departure from the club after seven years this evening, but he told the media at his final press conference: “I’ll always be a Barca fan. This is just au revoir. I’ll definitely be back at this club!”

Accompanied by Club President Sandro Rosell, Josep Guardiola and captain Carles Puyol, Rafa Mįrquez explained his motives for leaving after seven years at the club in a press conference held in the Sala Paris on Saturday evening.

“The best years of my life” 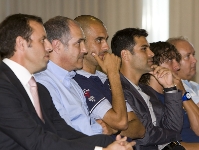 Marquez explained: “these have been the best years of my life and my footballing career. I’ve won everything possible with this team”. Marquez also thanked the club members, fans and the press “because although you had your doubts at the start of my time here, my hard work and quality made you change your minds and that made me feel a part of this team”.

Marquez also thanked Frank Rikjaard and Pep Guardiola for the confidence the two managers showed in him, as well as President Sandro Rosell who “really went out on a limb for me” in 2003. I’d also like to thank him for organising this act for me, because not every player has the chance to leave with such a great send off”. 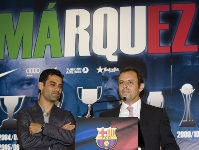 After winning 2 Champions Leagues, 4 Leagues, 1 World Club Cup, 1 European Super Cup, 1 Spanish Cup, 3 Spanish Super Cups and 3 Catalan Cups, Rafa Marquez insisted: “for the rest of my life, I will always be a Barca fan. I’m sure that I will one day return to Barcelona and to this institution”. 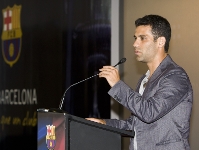 Marquez continued: “winning titles has been important of course, but the institution and supporting the club is the best thing”. Explaining his decision to leave, Marquez made it clear that: “last season I didn’t play as much as I’d have liked and before the season ended I spoke to Guardiola, who told me the choice was in my hands. I think my time here has come to an end - I’ve always been ambitious and I want to be a regular starter. That can’t happen here, so it’s a good time to leave with my head held high and start a new challenge”,

Finally Marquez commented: “farewells are said to be sad affairs, but I’m leaving happy in the knowledge of everything I have won here and everything I have. I’d have loved to retire here, but things don’t always turn out as you’d like them to. I’m still not sure where I’ll be going, I’m weighing up the options”. 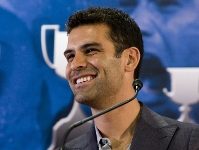 Rosell: “He has been a reference point”

FC Barcelona President Sandro Rosell stressed the importance of Rafa Marquez to the club during his seven years in a Barca shirt: “he has been one of the pillars of the success of recent years and a vital part of both Frank Rijkaard and Pep Gaurdiola’s teams. He has been a reference point for the team over the last seven years. Marquez has been an example to us all for his football, his personality and his social implication”. Handing him his commemorative plaque, Sr Rosell told Marquez: “you leave your mark on this institution which will always have its doors open to you”. Wishing him all the best for the future, the President concluded: “friends forever, Barca fans forever and Rafa Marquez forever!”