On Thursday, speaking in Norway, Zlatan Ibrahimovic has said that he’ll be staying at what he believes to be “the best club in the world”.

In his press conference before the game this evening with Valerenga, Ibrahimovic made it clear that he plans to stay on at the club. “I’m a Barça player and I shall remain a Barça player” he said. The Swede has high hopes for the season that’s just getting under way and already has his eyes set on the first title of the season, the Spanish Super Cup against Sevilla. 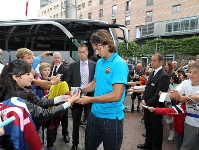 The striker said he has spoken at length with Pep Guardiola, and “he told me I’m important for him, and from now, what I have to do is keep working hard to maintain his confidence”. Ibrahimovic feels it is only normal for there to be competition at a team like Barça, which is something he has to assume and respect.

Several rumours have emerged about his future in recent weeks. But the Swede claims “those rumours have not affected me because I have no doubt that I want to stay here. I’d rather take the rumours as a compliment”. 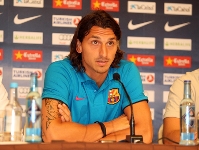 “I came to win the Champions League”

The Barça player once again revealed his ambition by saying “I came here to win the Champions League and I’ll continue working towards that objective”.